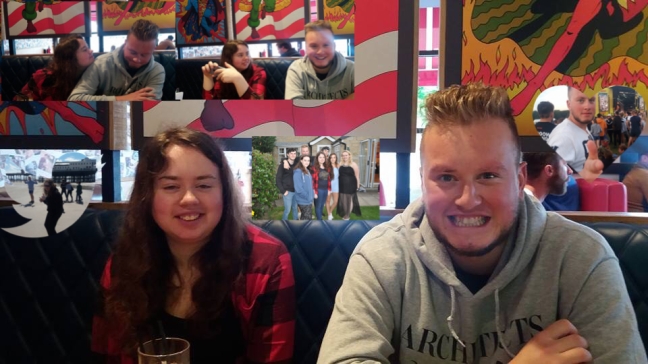 As many will know from the blogs, the last 14 months have been difficult for #TeamDuke. But, with the love and support of each other, family and friends we have walked through the storm and are stronger than ever.

However, it can never be under estimated the effects of a parent walking away from their children – regardless of their ages – can have.

My love and admiration for Ben and Liv grows stronger every day.

I now want to publish the below letter, from Liv to her mum. The purpose for it being published in such an open way is the hope that Ben and Liv’s mum will understand, truly understand on a human level. Not on the level that she has been morphed into.

To their mum – if you are reading this, please read it as Ben and Liv’s mum. The person who raised them so wonderfully for so many years before ……….. Well, that’s where I stop.

And, anyone who believes this is mean spirited / inappropriate to post publically, you don’t need to read it. In fact, I would ask that you don’t.

These are Liv’s words and are written from the heart and from a place of love: –

“I have noticed my mum having posted an open letter on Facebook over Facebook, of course it warranted some level of response seeing as I am her daughter and I know people worry about mine and my elder brother’s reaction to seeing stuff like this on Facebook. To be blunt, it does sting, the only true communication that we have with our mother is through Messenger, and recently at least on my end, it’s been filled with what looks like both of us talking about two completely different things.

Me and Ben however are fine. I am about to go to university, while my brother is about to go into a new job in Media. We are keeping moving forward, trying to shoulder through the things that at times sting. We have an amazing Father, and his amazing partner, Audrey, who keep pushing us forward if we happen to get caught in the moment. I know I’m known as the more sickly of the two, Ben is more of a health freak than me and I’m someone who has ups and downs, but at the moment my life is mostly ups, thanks to the amazing support of both my family, and some of the greatest friends that I have ever had the pleasure of establishing. Ben’s social life is as active as ever, and he is still addicted to festivals and Rugby.

I’m sorry if I seem rude, disrespectful and all that, but in the recent months we have learned to just try and avoid the drama around my mum. I know what has happened here, I wish I was my age now (as in when this all started) I could’ve stopped it but back then I was too young, as was Ben. We didn’t know what was happening, and I never noticed that my mum was crumbling after the deaths of my beloved grandparents. I know my mum will read this, I know you will likely shake your head over it. But, me and you are too similar for me to not notice how you are ticking, as I am very much the same. We have the same vulnerabilities, and our thought process is likely very similar. Without the careful support of some very patient friends, I used to victimise myself, I still do at times, and it’s something I wish to work myself out of. It’s a slow process, but it will get there. You say how we are mirrors, it made me think about what happened between us. I think you saw me, and I saw you. We took very different paths in dealing with our issues, and I am still scared for you. I am still scared that eventually I am going to lose you completely in one way or another, and this thought haunts both me and Ben. I’ve offered my hand out, it’s still there. After everything, it is still there. I don’t know if you deserve that, after everything you have done to not only me, but my Dad, my brother, my aunts and my uncles, my grandparents and your friends.

While I am writing this, I don’t know if it will get through to you. I’ve written things so similar to this, and it’s like a constant cycle of me never getting a proper response from you. Just something cryptic, something about you being chosen or even that I am chosen. Mum, we are both humans. The same as everyone else, we are not better, we are not worse, we are simply humans. We aren’t some chosen to survive the eventual storm, if there was truly a divine, they wouldn’t do that. Pick a group of random people, and make them abandon their family. You’re just using this as an excuse to run away, run away from the fact that you have majorly messed up this time. What sort of divine creature would make a woman not only have an affair on a loving husband, but abandon their entire family in the process. None. So please, stop running from this, it doesn’t do any good, it just makes everything worse, and I know I am your daughter and a generation apart from you, but this is something that you need to trust me on.

You need to work with us on this, your friends need to work with us and support you. These thoughts, these visions, don’t get me wrong, I don’t fully disbelieve in a spiritual presence but I know something isn’t right about it. The divine doesn’t happen to appear after death and trauma in the family, but I know something else does, and I know how corruptive it can become. And in the end how dangerous. You coming to terms with what has happened will bring relief to many people who I know sit around and fret about you, even when you say that you’re okay, it is simply like it is written on thin paper. We don’t know if it is true or not, we don’t know if it is actually you writing that to us.

So I ask that you please stop victimising yourself in this, Mum. And that you please stop running away on this path of self discovery or whatever the hell you’re doing now. I’m trying to still believe that somewhere in there is the woman that raised me, that somewhere in there is the person that I picked a large chunk of my personality from, and that you just take both mine and my brothers hands. We are here to try and pull this drama to end. I will do anything, I will pay for your ticket, me and Ben and the family will do everything we can. I know you ignore everyone, everything that says this. But you need to come home.

Love from your daughter, Liv”

To their mum – once you have read it, read it again, on your own. Look at the pictures at the start of this blog, and try to cut through to that human and humane person that you were for so many years. This is not about me and you. In truth, it never has been. This is about you, Ben and Liv. About you, Phil and Bruce. About you and the rest of the family. And, this is about you and the countless friends who wanted / want to be there for you. As Liv said, people are waiting to support you. They are even happy to embrace you being a vegan 😀. Jon

2 thoughts on “An open letter from Liv”

Earlier views from the ground